When I first realized that I wanted to sleep up high in the sky I started looking at portaledges from the three big manufactures at the time: Black Diamond, Metolius, and Fish. Unfortunately for me every single one of these portaledges were far outside of my budget. This is when I started to dig deeper for alternatives that would allow me to go on a multi-day climb on a dirt bag budget. Here is an extensive list of every portaledge (and vertical hammock) manufacture that I have come across in my years of doing this. 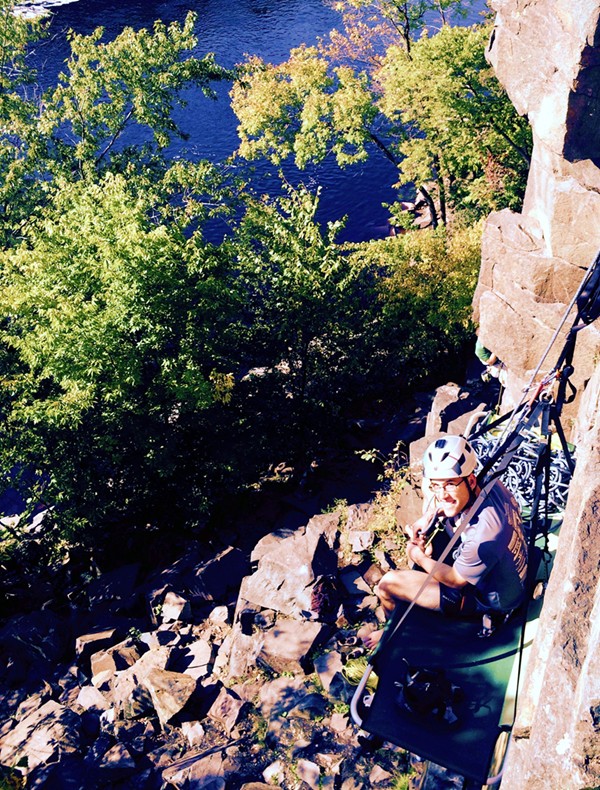 The first option, and by far the cheapest, is to make your own! If you know what to look for you can make a portaledge for under $100 (I have had MANY readers send me photos of their “15 minute” portaledges) that collapses for carrying in your haulbag or backpack. Top it off with a small solo tent off of Amazon and you have a fully climate proof portaledge system for under $200. Check out my portaledge and rainfly tutorial here: Portaledge Tutorial.

I am going to start this list off with a relatively weird and crappy solution. The single point hammock. You can read online in the climbing forums that anyone who has ever tried to sleep in a hammock while being smashed against the wall or tree all night usually doesn’t sleep well. But! If you just need something to get you through the night during a big climb this can be a very cost effective solution. I have personally used the Mosquito Hammocks Bat Hammock for quite a few nights up in the tree canopy and can honestly say that the spreader bar design which they incorporate makes for a good night sleep. At times it feels a little claustrophobic with a big sleeping pad and the rainfly down but the Bat Hammock is built like a tank and is pretty much impossible to fall out of (I usually sleep untied in the bat hammock, don’t do this, haha). This is one of the only options that has an option for mosquito protection. Check them out here: http://www.mosquitohammock.com/

Another option which has a much nicer rainfly than the Bat Hammock (due to the ventilation ports, and door) is the K2 Kakoon hammock. If you find a solo portaledge on sale at https://www.backcountry.com/ you could probably pay less for a real portaledge and use an old bivy sack to make it through the night. This would be much more comfortable but having a fully enclosed rainfly like the Kakoon Hammock would be priceless if you ever get stuck in a big storm so perhaps it is a solid deal anyway! You can purchase them here: MountainTools.com

I may be slightly biased but this is probably the most awesome option on this list ;). I have been building portaledges since 2013 and finally decided to use that experience to help offer a portaledge that cost less than a full set of Black Diamond C4’s. Since I do most of my camping in the trees with huge amounts of hiking the focus of this portaledge was lightweight and portability. The Acorn ledge is not only the cheapest portaledge currently on the market but it is the most collapsible too! It easily fits inside a haul bag or even a 50L backpack. Go visit the shop for more photos and videos: SHOP! A two person TREEfool ledge is currently being tested and will be available soon!

D4 portaledges is one of the newest manufactures on this list but John, the creator, is one bad-ass climbing veteran who is passionate about designing top-of-the-line portaledges and has been doing so since the 1980’s! Although I have not met him personally a good friend of mine has spoken with him many times and can attest to John’s passion for climbing and sleeping high in the sky. The D4 portaledges employ a fantastic tubing design with a rounded end which makes setup nearly effortless. The portaledge basically assembles itself! D4 also makes many different variations like a super light alpine-style ledge, a trapezoid shaped portaledge, and a carbon fiber framed belay seat. Many years ago when I was hacking into old aluminum framed military cots and weighing them on my scale (some came in at under 2 lbs!) I couldn’t help but wonder why the big manufactures used fat-heavy milled square corner pieces instead of the curved tubing like all of the military cots employed. When D4 first launched on Kickstarter my question was answered, it is BETTER to use curved tubing but the big manufactures like BD and Metolius were just following the rule of “if it ain’t broke don’t fix it”. Well, that may have cost them their authority in the portaledge business because D4 portaledges are now the best design on the market. If you are looking for the best portaledge that money can buy check them out here: D4 Portaledges

Oh! And John just contacted me and said they have a new portaledge coming out soon. The Octapod! It looks pretty BA so go check it out. 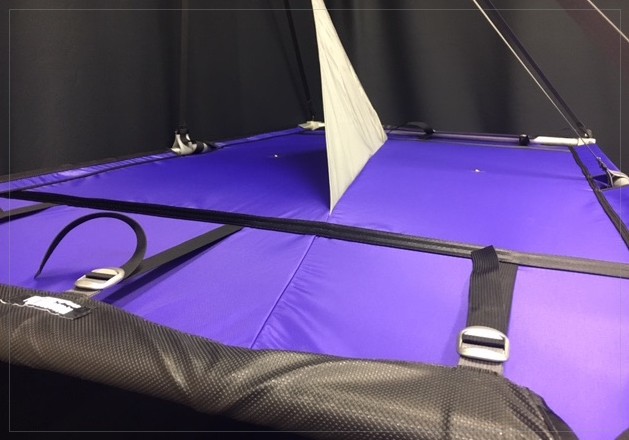 Runout Customs is a small company that creates all their gear in the USA. Although we have never physically met I have done business with him online and I couldn’t recommend anyone else more highly. He was the only guy willing to sell me portaledge parts when I was first learning how to build them myself and I am so thankful for that. His build process is superb and his ultra light style of portaledges are exactly what I think is needed for the future of tree camping gear. It appears that he has recently partnered with D4 ledges and they are now pushing the limits of portaledge design. Check them out here: Runout Customs UL 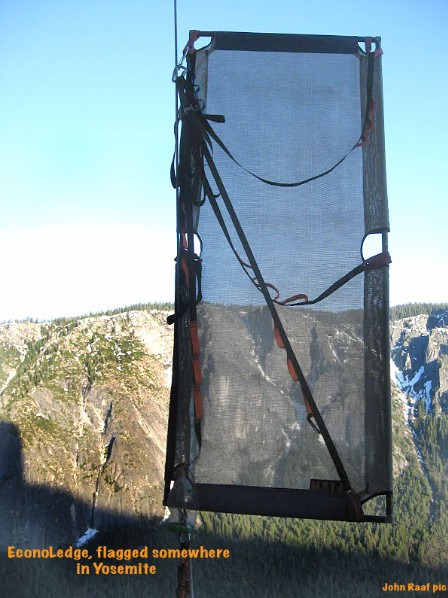 The econoledge is one of the most unique portaledges on this list. When I was first designing the Acorn portaledge I wanted to find a fabric around 500denier that was NOT waterproof so that the ledge could be used with a cheap bivy sack in a rain storm allowing the rain to just drop through the bedding. Unfortunately I have been unable to find anything even close to this but Fish ledges solved this problem by using a pvc coated mesh. I don’t know how they do it because I tried this stuff and just could not figure out how to durably so it but these guys must be using some magical process that I am unaware of. They are also the only portaledge manufacture on this list that uses chromoly tubes instead of aluminum. Heavy ledges that are built for the abuse of big walls! Check out the econoledge and many other designs here: Fish Econoledge 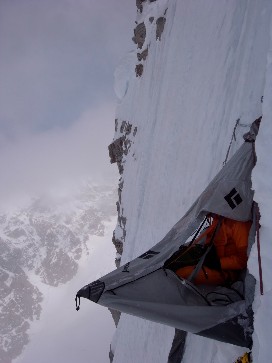 The Black Diamond Cliff Cabana is the first real portaledge that I slept on. I had been building portaledges for about five years when I finally touched a non-diy portaledge and I was blown away by the small details that BD uses to make their portaledges easier to setup while climbing. From the stainless wires that secure each pipe to the asymmetrical cut corners that allow for easier tube installation this portaledge is made for being setup on big walls. These details definitely come at a price since the Cliff Cabana is one of the heaviest portaledges on this list but many climbers happily pay that price for the ease of setup! Black Diamond Cliff Cabana

One of the heavier portaledges on this list the Metolius Bomb Shelter uses a classic design. 1.125″ aluminum side tubes with a spreader bar and heavy duty fabric. I have never used the bomb shelter personally and don’t know anyone who has but if you are looking for a durable portaledge check them out: Metolius Bomb Shelter

This company hails from across the ocean and looks to be a North Face A5 (no longer made) portaledge copy. I have never seen one in person but thought I should throw it on the list for all you guys on the other side of the world. Check it out here: Altus Yosemite

The Tree Boat has been the go-to tree camping hammock since people started sleeping in trees…. well. Ok, our ancestors used to sleep in the trees a few million years ago in nests but I digress… The tree boat is big, comfortable, stable, works well with a sleeping pad, and is portable. They do not offer a rainfly on their website but in the movie “TreeVerse” two gentlemen use treeboats with rainflies thru multiple days of heavy rain so perhaps you could ask NewTribe and see what is up! Check them out here: Tree Boat!

This is a small company offering a wide range of options. I have never used their gear but I assume they would suffer the same problems as a tensile tent (read below). They look great and are family owned so give them a look: Treez Tents.

I will be honest, I am majorly biased against these guys. I won’t go into the details but their latest offering is essentially a hammock with an extra anchor point which makes setup more complicated than a regular hammock without the benefits of their bigger tents. The bigger tents are quite comfortable using a sleeping pad but the UNA is just too hammock-like to comfortably sleep with a sleeping pad. And unlike a real hammock where you can solve the sleeping pad problem with an underquilt you can not currently use an underquilt with the Una. But the worst part is the high tension required to properly setup the tent in the canopy is dangerous due to the leverage it puts on limbs when camping high above the tree-base. Check it out here: Una Tent